If you’ve read the post titled “First Thought of the Day” then you may recall that I suggested that we choose to begin each day with a verse from psalm 118, which I consider to be an excellent thought to begin each day. It is a way to program or re-program our minds.

You know… that thing that makes you one of the superior beings on this planet. That thing that is not only capable of, but has created your world!

And you own it free and clear!

It is the most fantastic computer ever imagined. It can store incredible amounts of information, and it can do it in technicolor. It records everything… sights, sounds, smells, tastes, and touch.

Can Bill Gates (or anyone else for that matter) make a computer that can do that? NOPE! Not a chance.

Just to make this point, I’d like you to read this excerpt from a book called “The Greatest Miracle in the World” by Og Mandino.

To set the scene so you can better understand, the name of the chapter this excerpt is taken from is called “The God Memorandum”.

Now don’t go getting all bent out of shape if you don’t believe in God. That’s your prerogative, but I’m sure you know plenty of people who do. We’ve all got to live together and if you don’t mind, I’m just going to go ahead and love you anyhow. 🙂

The chapter begins with this :

So keep in mind as you read this that this is God speaking directly to YOU!

Here is the excerpt:

Are you of feeble mind? Can you no longer think for yourself?

No. Your brain is the most complex structure in the universe.

Within its three pounds are thirteen billion nerve cells, more than three times as many cells as there are people on your earth.

To help you file away every perception, every sound, every taste, every smell, every action you have experienced since the day of yourbirth, I haveimplanted, within your cells, more than one thousand billion billion protein molecules.

Every incident in your life is there waiting only your recall.

And, to assist your brain in the control of your body I have dispersed, throughout your form, four million pain-sensitive structures, five hundred thousand touch detectors, and more than two hundred thousand temperature detectors.

No nation’s gold is better protected than you.

None of your ancient wonders are greater than you.

You are my finest creation.

Within you is enough atomic energy to destroy any of the world’s great cities… and rebuild it.

Are you beginning to understand how magnificent you are?

Can there be any problem that you cannot overcome?

Is it so far fetched to believe that you have the ability to do something magnificent? And that excerpt was just describing your magnificent Mind/Brain.

You are much more than that! 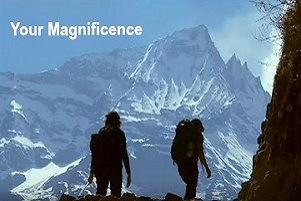 Here are a few more sentences from the chapter describing YOU, that I bet you never thought about.

Your heart is strong. Touch your chest and feel its rhythm, pulsating, hour after hour, day and night, thirty-six million beats each year, year after year, asleep or awake, pumping your blood through more than sixty thousand miles of veins, arteries, and tubing… pumping more than six hundred thousand gallons each year. Man has never created such a machine.

Your skin is clear and a marvel of creation, needing only that you tend it with soap and oil and brush and care. In time all steels will tarnish and rust, but not your skin. Eventually the strongest of metals will wear, with use, but not that layer that I have constructed aroundyou. Constantly it renews itself, old cells replaced by new, just as the old you is now replaced by the new.

Hopefully by now you have figured out that in Og Mandino’s book,

The Greatest Miracle in the World is

I think it’s pretty clear that YOU are “Magnificent!”

Your Greatest Conversation
Charlie and the 5 Words
When You First Wake Up
Share This:

6: Be anxious for nothing, but in everything by prayer and supplication, with thanksgiving, let your request be known to God;

7: and the peace of God, which surpasses all understanding, will guard your hearts and minds through Christ Jesus.